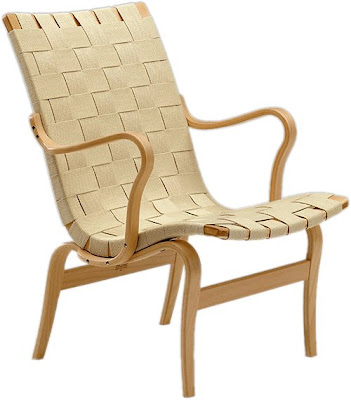 Like many designs during the Scandinavian Mid-Century Modern movement, Bruno Mathsson’s chairs took an organic form. However, his forms developed from study and function rather than visual aesthetic. Mathsson believed that a chair should fit the person, and not the other way around, thus making the person more comfortable and productive. He was perhaps the first base his designs on the study of ergonomics. Between 1933 – 1936, Mathsson fine-tuned his design for the working chair, which had a bentwood frame and a seat woven with leather or fabric of jute or hemp, which adapted to the contours of the human body. Though originally rejected by Swedish furniture manufacturers because of its startlingly new look, the working chair was soon mimicked by other leading designers, such as Jens Risom and Marcel Breuer. In 1957, it was selected as one of the most noteworthy examples of Swedish furniture by the Swedish Society of Industrial Design and the Swedish Furniture Industry Federation.