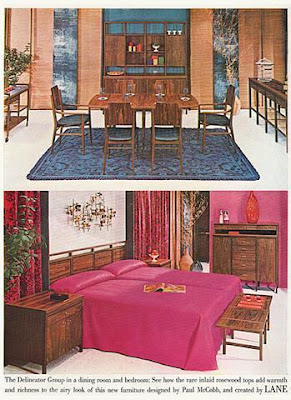 Scandinavian designers have long valued good craftsmanship. When this methodology was applied to the simplicity of the modern style in fusion with the folk arts, it created a modern style individual to the Scandinavian nations. Folk influence and warm woods lent a warm aspect to the striped down aesthetic, which appealed to consumers throughout Western Europe and America. ‘Good’ design did not take on the same connotation in each region however.

From the 1930’s onward, products from designers such as Borge Mogensen, Kaare Klint, Alvar Aalto, and Bruno Mathsson became widely popular and available throughout America. The condemnation of Modern architects and designers in Nazi Germany and Fascist Italy at that time played a large role in the exportation of Modern design aesthetics to the states. The notion of an all inclusive International design posed a threat to Adolf Hitler’s image of power and intimidation, but conversely, in America it expressed a notion of progress and empowerment for all walks of life.

During the post-WWII consumerism boom in America, it is not surprising that ‘Good’ design took on moral connotations after such a horrific war. At that time, Americans were told to value good sense and cleanliness. The modern housewife kept her sleek new open-plan house uncluttered and impeccably clean. She made wholesome meals with her streamlined new appliances in her ultra-modern kitchen. Morality was thus taught through the ‘good’ design of interiors and furnishings via magazine images and soon, via the television. After a time of great turmoil in which many men died, many families made great sacrifices, and the gender roles were reversed as women left the homes to work in the positions left vacant by the soldiers, American’s were anxious to develop a stable personal and economic life. This was done successfully through the advertising of the Modern interior as the setting for the idyllic American family. Americans could quite literally purchase good morals.