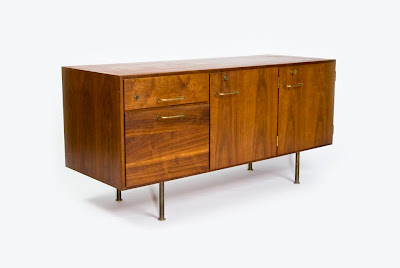 Jens Risom studied under Kaare Klint at the Royal Academy of Fine Arts in Copenhagen from 1935 – 1938. After emigrating to the United States in 1939, he became the textile designer for Dan Cooper, New York. Risom’s chair design, model no. 666, was the first to be manufactured by Knoll Associates, and was produced successively as the design evolved. Risom imported the Danish approach to Modernism to America through his high-quality craftsmanship and simple designs. He humbly described his work as “very basic, very simple, inexpensive, easy to make.” His inelaborate pieces were shown at the 1939 New York World’s Fair in collaboration with Hans Knoll in several interior spaces. Risom went on to further influence American Modernism as a trustee of the still-prominent Rhode Island School of Design.