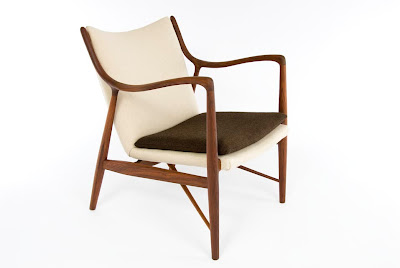 FINN JUHL
1912 – 1989
Under his father’s insistence, Finn Juhl attended the Architecture School at the Royal Danish Academy of Fine Arts, though he secretly intended to study art history while he was there. Juhl obediently went on to work for the prominent architect, Vilhelm Lauritzen, during which he also collaborated Niels Vodder on many furniture pieces. Despite his earlier interest in art history, his designs deviated from the historically influenced methods taught by Kaare Klint, and instead embodied a more avant-garde approach. Having broken the mold, his designs were both a breath of fresh air and a threat to what the Danish Modern style had come to represent.
In 1945, Juhl set up his own design studio and set out to create solid wood furniture with an organic sculptural quality. Superb craftsmanship was balanced with free flowing forms to create a sense of weightlessness, as represented in the Chieftain Chair (1949). Juhl was also one of the first to experiment with the usage of Teak for interior furnishings, thus developing many different construction techniques leading to its widespread use in Danish Modern design.