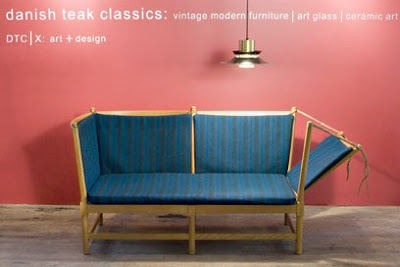 The geographic location of the Scandinavian Nations encouraged the refinement of their design principles rather than a constant reinvention that other stylistic movements have experienced. Such is the case with many Danish designers, including Borge Mogensen. From 1938-1941, Mogensen studied at the of in , but the strongest influence on his designs came from his assistantship with the earliest leader of the Danish Modern movement, Kaare Klint. Unlike other Modern designers, Klint believed the historic styles should be studied and improved upon, rather than discarded for their age. Under Klint’s tutelage, Mogensen learned to apply a functionalist approach to historic styles by stripping down the pieces to their most fundamental design, then rebuilding them based on dimensional analysis in accordance with the human body and the needs of a modern home and lifestyle.

Throughout his career, historic styles continued to inspire his designs, most notably, Shaker and Chinese designs. Mogensen is noted for his concern in creating furniture that met the practical needs of the average family, whilst being beautiful, sleek, and impeccably well crafted and organized. Mogensen continued to employ the investigative, hands-on techniques he learned from Klint, which he referred to as the “workshop method.” These interests lead to many different series of modular storage cabinets that could be adapted to the particular needs of the modern individual or family.